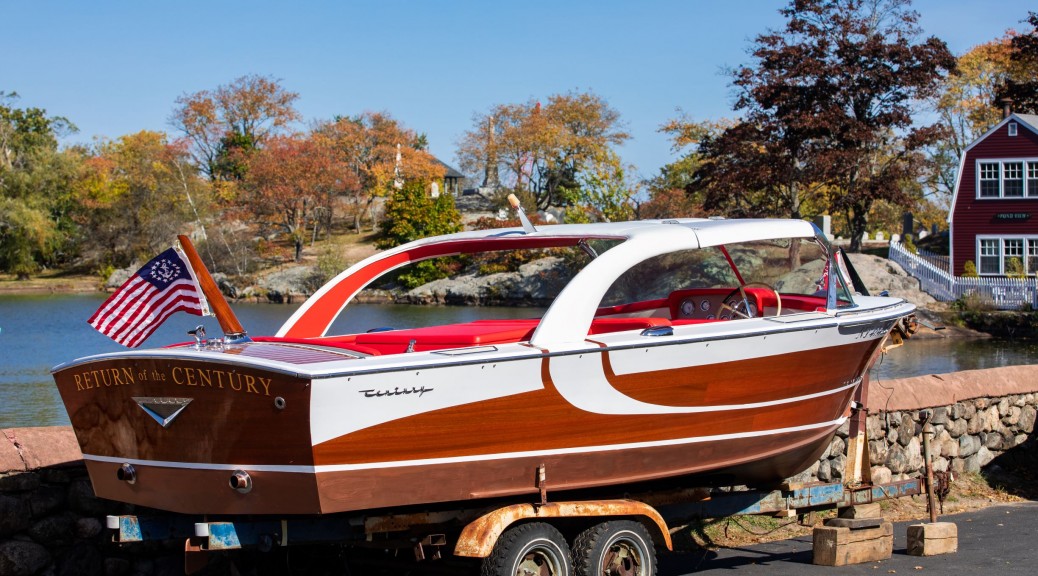 This project started with a customer who came to Redd’s Pond looking for a Century Coronado like one he remembered from his teens. We scoured the internet for a months looking for candidates and ultimately found this one about 45 mins from our shop. we set up a visit, and found that it was a perfect restoration candidate.

What we found is a  1961 Century Coronado with a restoration initiated 20 years ago, but never finished. While the previous owners did a great job tracking down almost every bit of chrome hardware and engine part almost all the woodworking remained.  Some structural work had been done in the stem and topsides frames, but otherwise most of the boat needed replacement.

I usually start a project like this documenting where everything I take off goes to guide reassembly, but in this case I had to start by trying to re-assemble the interior first to get an idea of what the interior looked like and to see if anything was missing.

From there I removed all of the interior I could and built a series of internal molds to retain the hull’s shape during the restoration and support it while upside down. We then rolled the hull over to remove the bottom planking.

The old bottom planks were removed and saved for templates as well as the keel while half the bottom frames (every other one so the hull stayed together and kept it’s shape).

This was a great opportunity to double check fairness of the plank lines as well as the bottom of the hull. we made sure to double check symmetry, and a little fairing at the transom to help the hull get up on a plane as well as general smoothness.

Next came bottom planking. Since we had almost all the original planks we had general templates to rough out the planking stock. We were able to get some 1 1/2″ thick mahogany stock that allowed us to  make pairs of planks from a single board sawn down the middle, which not only saved time, but led to a lot less wasted material going into the trash.

Once the bottom planks were made up and fit tight, we shaved a little of each edge, sanded, sealed the insides with Smith’s CPES and Century red bilge paint and then set all the planks in 5200 marine adhesive before fastening down. The small gaps and flexible glue allow the bottom to swell when soaked without applying too much pressure to the chines and pushing them out, while also having a rubber-gasket seal between every plank even when it has been out of the water and dried out for months. The bottom was then faired and sanded smooth with all screws set low enough to have a putty or wooden bung cover depdending on if it would be painted or varnished.

With the planking all completed, below the waterline was again faired, and the waterline marked off. Then a 2 day soak under a thin plastic sheet helped raise the kiln dried wood to a suitable moisture content before being sealed with CPES and covered in copper bronze bottom paint. The boat was then flipped before final sanding of the topsides to re-fit the deck before staining and varnish.

The waterline was scribed on the boat based on the original planking and the bottom painted with InterProtect  and copper bronze bottom paint before setting up the flipping jig and getting her back upright.

While I reused as much of the deck as I could, I ended up replacing the aft deck and a lot of the foredeck due to rot.  With these parts fit, fastened and bunged, I finish sanded all bare wood, stained and varnished 12 coats. While a lot of the topsides and deck would end up painted white with the jet design it was much faster to varnish the whole boat than to try to work around all the curves and edges of the jet and keep them crisp.

Once the varnish was built up I worked with a local sign painter to re-develop the shapes for the white paint as well as have the name of the boat lettered in gold leaf on the transom. She pinstriped the outlines on the hull so I could come back and brush more liberally in order to get a really flat coat. 5 coats of varnish were applied on top of the transom lettering to protect it for seasons to come.

With the hull complete, attention was turned to the interior. The engine box had deteriorated as well as the fore-deck so they were replaced, some of the controls and hardware had been acquired by the previous owner so they were cleaned, reassembled and chromed. Other missing or broken parts were remade and chromed as well. All the benches and side paneling were in good shape and were just cleaned up for being re-covered with vinyl.

The vinyl was re-made to original templates in a kit and installed by local upholstery group.

The engine was re-assembled, painted and test run by a local mechanic and finally the boat was re-wired with modern safety components such a main battery switch, a bilge blower and updated wiring.

Once the engine was test run and tuned and all wiring installed and tested, I invited a local friend to come take photos of the boat while we waited for a transportation company to truck it out to her new home in western New York.

The boat is currently being stored for the winter awaiting summer commissioning. Check back for photos and videos of it running in the lake.